Migration and Diaspora as Issues of a Global History of Christianity

International conference organized by PD Dr. Ciprian Burlacioiu at the Center for Advanced Studies at the LMU, March 25th – 26th, 2020 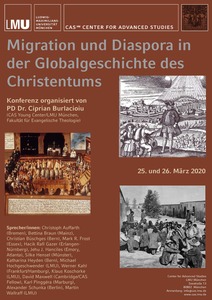 This interdisciplinary conference is raising the basic question, if and to which extent migration and diaspora should be considered as elements of a church history interested on transregional, transcontinental, or even global interactions not only for the last centuries but in the long run of the history of Christianity. A ‘global’ history of Christianity aims to integrate local histories on a larger map and to contextualize particular dynamics on a broader context as stimulating trends or as developments under the influence of a more general ones. Migration – as a spatial movement of people with the intention to resettle on a temporary or a more permanent basis – has many reasons and takes many forms. The intention of this conference is however not to discuss every form of migration. Even more diverse is the phenomenon of diaspora which in the contemporary academic discourses is highly debated.

All case studies discussed during the conference have to be understood as exemplary for an ecclesiastical historiography seeking to enlarge its criteria of selection in a systematical manner. For different reasons, ecclesiastical historiography focused traditionally on sedentary and territorially shaped forms of religion. How will look like a church history which will not be interested only in confessional paradigms, on the condition of religion in different political, social, and cultural settings etc., but asking in which way the religion of people was influenced by the experiences of migration and the condition of diaspora? Nevertheless, since migration and diaspora were not always and all over crucial in the history of Christianity, for getting a balanced picture it is fundamental to determine the scale of their importance for the Church History as an academic discipline.

The conference includes a round table discussion with experts on Africa, South-East Asia, and Latin America, debating about the place of religion and migration in the urban context of these regions.

This conference is organized in collaboration with the Center for Advanced Studies (LMU) and the Heisenberg-Programme of the German Research Foundation (DFG).