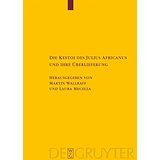 A new form of organizing knowledge was adopted during the time of the Roman Empire, with works such as the Cesti of Julius Africanus (3rd century AD) playing a central role in the process. It records areas of knowledge that appear disparate from a modern point of view. They include magic, medicine, the military, agriculture and poetry. This volume examines the work, which survives only in fragments, along with its somewhat complicated reception, thus closing a gap in current research.